I’ve said it before and I’ll say it until my last breath. Lord give me the confidence of a mediocre white man.

In this case, give me the confidence of a mediocre white man who smashes out frothing-at-the-mouth letters to the editor that are thinly designed exercises in whining, under the guise of adding anything of worth to the social lexicon.

This gem, tweeted by Hamish McNeilly (@southernscoop), is one of many boring responses to Minister for Women Julie Ann Genter’s comment that old white men should move on from company boards. 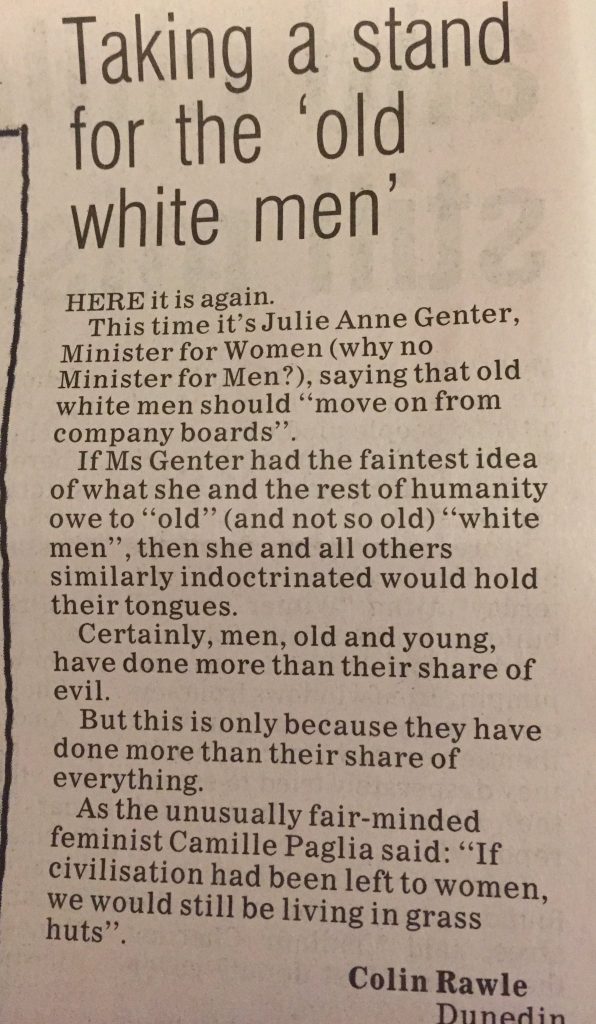 Genter has since written an (in my eye unnecessary) opinion piece elaborating that yes, those men have a lot to offer, but they are not the only ones. She says that around 81 per cent of board members are men, and that she “strongly believes that older, white men should be on boards. I just also believe that people from other demographics should also be too; particularly women, young people, and people from other ethnicities are also massively under-represented at present.”

I respectfully disagree with her. I hold no such strong belief that old, white men should be on boards – but then, I don’t need to toe the line of respectability politics. I can say what I like. And what I would like to say is this.

Please shut up and sit down.

Colin, you have started you letter “here it is again,” in a tone that implies much eye-rolling and heaved sighs and disapproving impatience, as if Julie Anne is a recalcitrant child who’s up to old tricks.

The reason we do not have a Minister for Men, Colin, is simple. Men are not oppressed. Yes, they experience some hardships that are specific to their gender. But the Minister for Women is a feminist. She is working for gender equality and to address patriarchal structures that damage both men and women and in this way, Colin, you will benefit from her work too.

The reason we do not have a Minister for Men, Colin, is that men have had fair representation of their rights and their views for centuries. This is obvious in the fact that 81 per cent of company boards are men, and that only 38.4 of parliament is women. This is 46 women out of 120 positions, Colin, and it is the highest level of representation women have ever had.

Colin, the idea that women owe you for centuries of oppression, domestic violence, abuse, silencing, lack of wealth, lack of independence, and lack of personhood is nothing short of obscene.

And here, after all that, is you. Still insisting that we “hold our tongues.”

I am glad you acknowledge that men have done more than their fair share of evil. The reason for this is not because they were doing more than women of anything. It is because they had the opportunity, and they used it.

I find your use of quote marks around “old” and “white” bemusing. Am I to deduce from this that you are therefore neither of those things?

The people who disagree with you, Colin, are not “indoctrinated” and it is offensive that you would use this word, with such complex historic context, to describe Julie Anne and the many people who agree with her position.

I especially enjoy, Colin, how you’ve decided that sexism alone was not enough, and concluded your letter with a healthy dose of racism thrown in alongside. Camille Paglia certainly doesn’t represent me or my feminism, and her implication that those who do live in grass huts are somehow less evolved than those who don’t is deeply flawed. I am quite happy for you to claim her for your side of the court.

Colin, Julie Anne has measured her comments by saying that old white men still have a place on company boards, and I’m sure this news will be a balm to your frazzled soul.

I believe in gender equality, Colin. But I also believe that the time of men such as yourself is over. If it has been acceptable for boards to be 81 per cent men and probably in most cases 100 per cent white, I think it should now be acceptable for them to be at least 81 per cent women, and to be made up of all the ethnicities who are proud to call New Zealand home. If it has taken 88 years since we named the first woman Member of Parliament, to now have 46 out of 120, it should not take very many years at all to make that an even 60, or more. Women make up more than 50 per cent of the population. We demand and deserve the right not just to representation, but to lead.

I am sorry that scares you so much, Colin. I imagine you don’t find me very ‘fair-minded.’

I’m sure you’ll excuse me if I don’t give a fuck.