I’ve been the lucky recipient of not one, not two, but four letters from WINZ this week, each one requiring different things of me. I want people to understand how complex and stressful being a beneficiary can be.

I count myself lucky. I’m educated, I know my rights, and I have a lot of support. Over the last five years, I have learned how to advocate for myself and how to navigate the complex and stressful system that is social welfare.

Even so, getting mail from WINZ makes me break out in a cold sweat. My hands start shaking. I feel panicky, because I never know if this might be the mail that says “You are no longer eligible.”

Being a beneficiary is not a passive role. It’s very important to participate in the system, because if you don’t, or if you do something wrong, you risk not only losing your benefit, but ending up in court. Mail from WINZ always includes a section of “Client’s information,” which is basically a list of ways you could fuck up. And they are utterly merciless if you do.

I’ve written before about the comparison between convictions for tax evasion and benefit fraud. Here’s one snapshot: 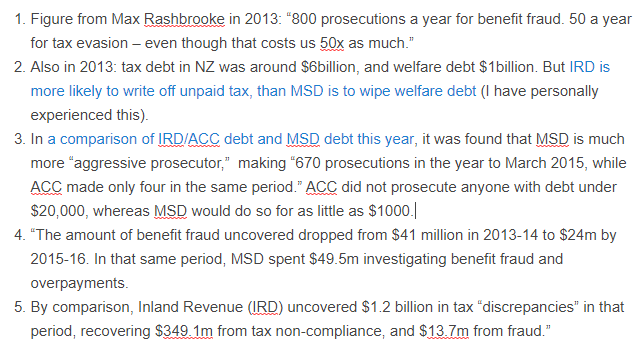 In order to receive the benefit I am entitled to, I have to:

1. Declare my income every week.

This can be difficult because I’m a freelancer who works when I’m able to. I don’t earn much, and I earn it sporadically. You are required to declare income in the week you earned it, not the week you get paid. This can be really frustrating, and dangerous, because WINZ will adjust your benefit according to that figure. So they might reduce my entitlement one week because I did some work – but that doesn’t mean I got paid for it then. It’s more likely I get paid the following month. The system doesn’t account for that.

2. Provide a new medical certificate every three months. This is how that “reminder letter” looks:

So basically, they lead with the presumption that your benefit is going to end, and then, several paragraphs down, they say you need to provide the certificate. It’s an incredibly stressful way of wording things.

Not to mention that there’s no wriggle room on the “three month” rule. This is the result of the Sickness Benefit being abolished in the 2013 welfare reforms. Now there’s only two options for people with illness or disability: the Jobseeker Support benefit, or the Supported Living Payment (previously the Invalid’s Benefit). Being on Jobseeker requires you to do all the things listed above. I have applied for the Supported Living Payment, as obviously my incurable arthritis is probably not going to drastically improve in their three-month timeframe, but my application was denied.

3. Proving I’ve attempted to increase my income and/or reduce my living costs

Because my circumstances are difficult, I can sometimes qualify for a thing called Temporary Additional Support. This has to be applied for every three months. Here’s a glimpse of what that paperwork looks like. 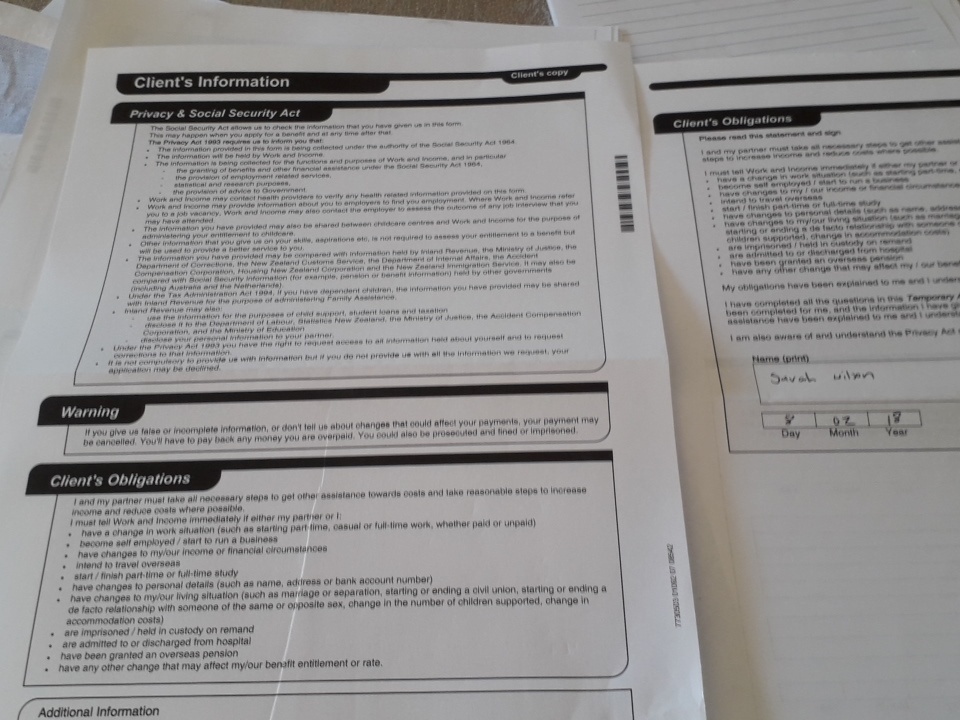 See what I mean about “information” which actually feels, let’s be honest, like a thinly veiled threat. You will be a Good Beneficiary. You will meet all your Obligations. That warning reads “you could be prosecuted, fined, or imprisoned.”

Nice. Very supportive. So is this little sentence: 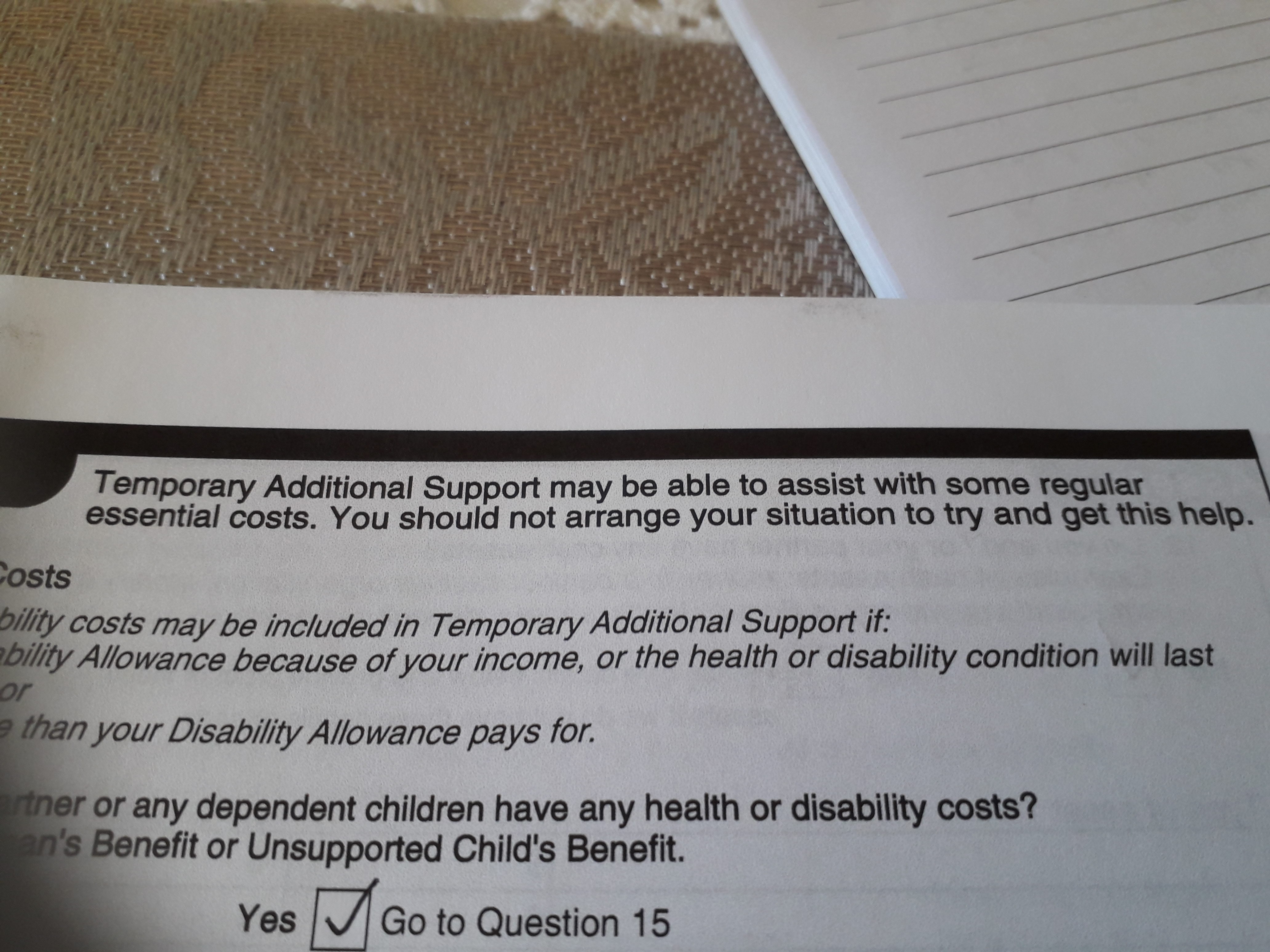 4. Reapplication for the Jobseeker Benefit, Accommodation Allowance, and Disability Allowance

Every twelve months I have to go through the entire application process all over again. I got this letter today. 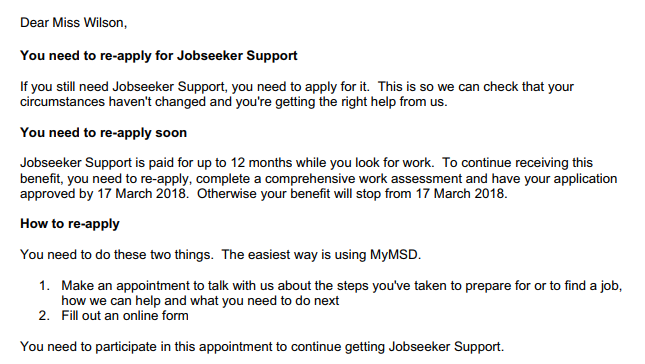 All of this communication is designed with the assumption that people are attempting to get or keep getting benefits they are not entitled to. It is organised as though you’re already a criminal. It is incredibly stressful to receive – and then I have to go through the process itself.

The only thing that has alleviated some of my anxiety about this in recent months has been my case manager, who was actually really good and helpful.

Yesterday, I found out she’s left WINZ. And I’m terrified. I have no idea who I’m “reporting to” now. Will they be understanding and compassionate? Unlikely. It’s long been documented that service at WINZ varies hugely depending on who you end up talking to. And that’s not ok.

I also want to take the chance here to do a bit of a throwback to when I did a request under the Official Information Act for my file at WINZ, and any internal correspondence they had on me. Most of it was redacted, of course, but I did find out that they monitor this website, my social media, and had examined CCTV footage of me in their office.

So if you think I’m paranoid for no reason, you can think again.

I guess my next question is: is anything going to change under the new government? And I’m not talking about an extra $20 a week or whatever, though of course I’m not going to say no to that. I’m talking about actual systemic change, like maybe reintroducing the Sickness Benefit so I don’t get hounded every three months. And addressing some of the communication issues.

I don’t think any of us are asking for that much. I just want to be treated like a human.