Actually, that’s not true. I am surprised. I shouldn’t be –I damn well shouldn’t be, after the past four years – but I am, and I’m disappointed, and I’m goddamn furious.

I’m glad that I’m surprised, because that shows is that I still expect people to behave with human decency, even when their politics don’t align with mine. That shows that I still have hope that this – the way that welfare and beneficiaries are spoken about, used as political pawns, and actively worked against in New Zealand – that all of this can change.

Just a couple of days ago, before the election date was announced, I reminisced a bit about when I started this blog, and why. It’s almost three years ago now. Here’s the relevant bit:

In the leadup to the last election, I did a breakdown of each party’s social welfare and health policies. I intend to do that again, and it’s a little early yet. But we already know some things.

We already know that National is as keen as ever to throw our most vulnerable people under the bus. If we weren’t completely certain of that, these tweets from Bill English yesterday were a rude reminder. 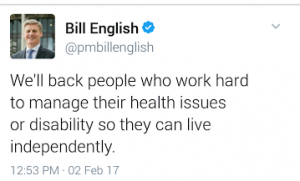 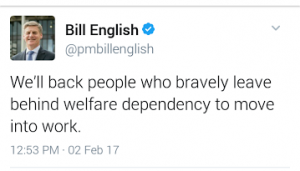 It’s very hard to be eloquent here, both because of the National Party’s incredible gall, and because I’m at that point of outrage where you basically just splutter and made wild waving hand gestures. I’m trying to come up with all the ways in which these tweets are frightening, wrong, and plain dangerous, but that’s a challenge.

There’s so many false equivalencies here. And it’s impossible for me not to feel personally attacked, though I know that’s stupid. Do I not work hard enough to manage my health? 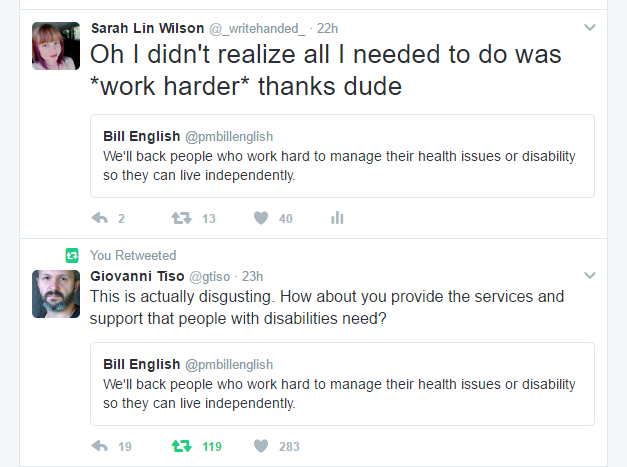 Giovanni is right. The services and support need to exist. At the moment, they’re woefully underfunded, from welfare through to special education through to the mental health sector. How is anyone supposed to “manage their health issues or disability” to attain your golden-eyed view of independence if there’s no support to do so?

And why is independence so revered and dependence so reviled? This is a battle I have fought within myself for some time, in large part because I brought into the idea that being dependent was the worst thing in the world, and I should avoid it all costs, even if it meant losing my physical and mental health completely. I had to be hospitalised before I accepted that I needed to go on welfare.

So then we get to “bravely leave behind welfare dependency” and I’m back at crying with frustration. What that says is: I’m not brave. I’m a drain on society, I’m lazy, and I’m cowardly to boot, even though I live every day with multiple disabilities, I work as much as I can without hospitalising myself once more (partly because it’s almost impossible to survive on the benefit alone), and I continue to fight for everything my illness took away. And part of that means being dependent – being courageous enough to ask for help and accept it, being a strong member of my communities, and yes, accepting social welfare. That doesn’t make me any more or less brave than anyone else.

The sort of rhetoric that English is intent on stirring here risks the lives of beneficiaries. It pushes people into thinking the opposite of what he says – ie, he says people getting off welfare are brave, therefore people taking it are not. People who manage their health and live independently are worth backing, therefore people who don’t (despite how “manageable” their condition or disability might actually be) are not, and aren’t working hard enough.

And once you start thinking those things, you start voting for policies that actively hurt vulnerable people, like widespread welfare cuts and enforced employment.

So. Deep breath. Eight months out from the election. What else do we know?

We know that the Labour party and the Green party have aligned themselves so closely that a vote for one feels like a vote for the other/both, and that neither of them have ruled out working with New Zealand First if it came to it.

When I was in the media all that time ago, both Labour and the Greens were clamouring to assist me. It felt wonderful at the time – finally, someone was listening. More than one someone. People who seemed like they cared, and had the power to back that up. But it became pretty clear, as the weeks and months went by, that everything they had suggested to me they might do… was not going to happen.

Don’t get me wrong, they tried. Both parties supported my cause publicly, which went a long way in both my own case and other people’s, and Labour went as far as to begin attempting to collect a well of qualitative data on beneficiary experiences. I contributed to that well, both personally and by collecting on their behalf.

I’ve not seen what was done with it all.

Labour’s welfare policy hasn’t been announced and I saw nothing that impressive or reassuring in their policy platform (p25/26 are relevant).

The Green Income Support Policy, (NB: current policy, not necessarily updated for election 2017, if they plan any major changes) is exactly what I want to see. I also like that their Disability and Health Policies and their Policy for Women, none of that’s new from what I read or said in the leadup to the last election.

What I am interested in is what The Opportunities Party might come out with. We don’t know much about their policies yet; they’ve only released three – tax, environment, and immigration – but reading their vision and their FAQs, it could be quite a different approach. That could go badly or well for them, I really don’t know.

I’m far, far from an expert in politics, I’m mildly well-informed in areas that affect me and that’s pretty much it. I wish I was much more widely-read. So I’m not really speculating on the upcoming election. I just started writing because I broke down after seeing Bill English’s tweets yesterday, and everything I’ve lived with since I got sick – everything I’ve lived with my whole life, as the child of a beneficiary – just overwhelmed me.

I really, really, fervently hope for change this coming election.

But I hoped that last time too.

One Reply to “So what else is new?”