Last week, a friend of mine was followed out of the gym and harassed by a man who considered himself entitled to her and her time. This “casual” sexism and predatory behaviour is terrifying.
In two days, America will swear in a president who has sexually assaulted women, who has made a long list of hideous remarks about women’s rights, roles and appearances, who verbally abused his woman opponent throughout the campaign, and who advocates “grabbing women by the pussy.”

In two days, America will swear in a man whose presidency is being lauded by the notorious Roosh V as “automatically legitimising masculine behaviours that were previously labelled as sexist and misogynist.”

“This is our moment,” Roosh says on his website. “I’m in a state of exuberance that we now have a President who rates women on a 1-10 scale in the same way that we do and evaluates women by their appearance and feminine attitude…”

In two days, America will swear in a president who makes men think that talking about women as objects, sexually assaulting them, verbally and physically abusing and demoralising them, are normal, acceptable, positive behaviours.

The Women’s March, which will take place around the world on Trump’s first day in office, is a move to show that we will not stand

for this. Trump may have won the presidency, but he cannot and will not win over women. He does not own our rights or our bodies, and he does not set the criteria for which we live our lives.

And neither does any other man.

Here is what happened to my friend last week:

“I was at the gym recently and a guy I’d occasionally seen and said hi to offered to spot me while I was doing bench presses. People have offered to spot me before, and I did need the help, so I said yes, I did my sets, said thanks, and went and finished the rest of my workout. Then he happened to walk out of the gym at the same time as me. He followed me to my car (I’m still grateful it was broad daylight with lots of people around) and tried to talk to me.

I briefly chatted to him, then tried to leave and he put his hand on the door of my car, preventing me getting in. Then he said ‘C’mon, you owe me a chat for spotting you. And I know you want the attention, look how you’re dressed.’ 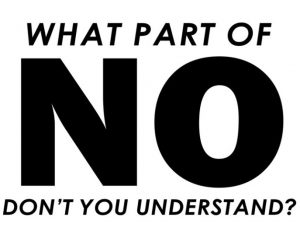 For the record, I was wearing short shorts, high top Chuck Taylors and a high neck tank top that said ‘tomboy’. Fortunately for me, I was too angry to be scared, and told him that I can wear what I want and I didn’t owe him shit. But he was a big dude and after he’d left, the fear kicked in and it left me really shaken.

I still don’t get that people don’t understand that NO ONE IS ASKING FOR ANYTHING WITH THE WAY THEY DRESS. Woman dress for themselves. People shouldn’t assume otherwise. And doing something for a random woman doesn’t mean she owes you anything. Ever. Helping a woman you don’t know to lift a weight doesn’t entitle you to her time or attention when you just happened to be closest person to her. And when our summer days are ridiculously hot and humid, I can promise you those shorts aren’t for your benefit – they never are, they’re always for me – but especially not then.”
Unbelievable, right? Except it’s not, because it happens All The Fucking Time.
Take for example this entry on the Fuck Customers tumblr, which often features entries from women who have been harassed by customers, clients, or colleagues. 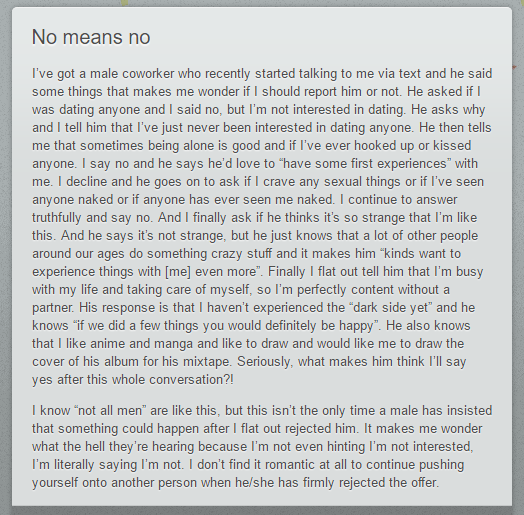 Yes. What the hell are men hearing when we say no? That we’re playing hard to get? That we’re joking? That we’re encouraging them to try harder?

When we say No? It means fucking NO.