So Paula Bennett is our new Deputy Prime Minister and has five portfolios: State Services, Climate Change Issues, Police, Tourism, and Women. Hmmm. I wonder which of those will fall pretty low on her scale of priorities?

Bennett has been asked before if she identifies as a feminist. In the wake of April’s controversy about sexist slogans on tourist vans Wicked Campers, she told journalist Philip Matthews she often couldn’t “be bothered with gender issues.” 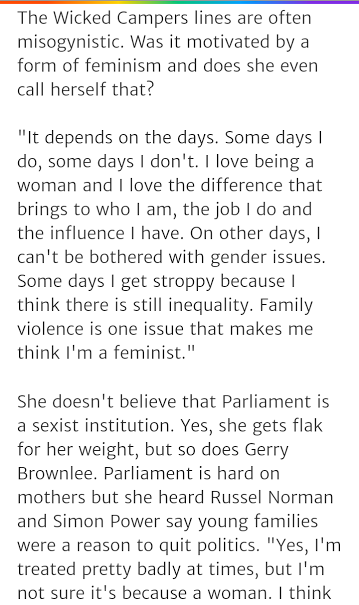 This week in an interview with RNZ she claimed to be a feminist “most days.”

Correct me if I’m wrong, but even these paltry answers are an improvement on our former Minister for Women, Louise Upston, who

refused to identify as a feminist and was pretty ineffectual for her entire term.

Meanwhile our new Prime Minister has said he doesn’t quite know what feminism means. Given that the answer is actually pretty simple – gender equality – that’s not super encouraging.

However, he has appointed women throughout his cabinet, he has not, as far as we know, harassed any waitresses by pulling their hair, and he was able to point out that “The four largest organisations in New Zealand are all chaired or run by women, so I don’t mind what label they use. What really counts is what they do.”

What can we hope for?

I don’t think you can really criticize the role, or the person holding the role, of Minister for Women without looking at the Ministry for Women itself. I had a friend point out to me the other day that they are not actually primary policy makers. A lot of policy they have an interest in – for example domestic violence, or pay equity – sits within other portfolios. Therefore they work at a cross-government level and this could explain why they don’t have the stronger legislation (firepower?) I’d hope for.

The Ministry’s main responsibilities are:

The Ministry carries out its work by acting as a catalyst for action and change, and by getting key issues on the agenda of government agencies and other relevant organisations. The Ministry provides accessible, evidence-based information to inform and assist others.

The Ministry carries out its work by bringing the voices, experiences and priorities of different groups of New Zealand women to government. It also works closely with other government agencies, women’s non‑government organisations and stakeholders within the private sector.

This all sounds like good stuff. (There’s more detail about what they do here). But New Zealand needs more. Our refuges are buckling under demands for their services. Some of them are closing down for lack of funding. The wage gap marches on. There is only 31% female representation in parliament.

However the attitudes towards family violence in New Zealand are in the midst of change as a result of a sustained national campaign – The Campaign for Action on Violence within Families, which aims at changing social attitudes towards family violence. The government has also implemented similar programmes designed specifically for Maori, Pacific and migrant women which are endorsed by their communities.

– CEDAW report into the Status of Women in New Zealand, 2010

We now have a Māori woman Deputy Prime Minister. As much as I have disagreed with almost everything she has done up until this point, I feel like Bennett has a huge opportunity here. She’s obviously a strong woman. She obviously has some understanding of the issues facing women. As DPM, she has a big platform to make real headway. I don’t think we can expect her to start campaigning under the feminist label anytime soon. I said, she’s got four other portfolios, so I’m not sure how important this one is to her – especially considering she’s only a feminist on “some days,” and often “can’t be bothered with gender issues.”

[With extra question marks to emphasize my doubt and try to cover my ass if this comes back to bite me on it].