Guess what I did today, reader? I (wait for it, this is a good one) I (keep holding your breath, prepared to be awed), I (I’ve built it up too much but it’s too late to back out) I SPOKE TO A REAL PERSON. Yes, ok, this is something I do most days. But it’s not something I’m good at. Here’s why.

I have generalised anxiety disorder, which means exactly what it sounds like. I can be anxious about pretty much anything. But social situations are right up there on the list.

If I have any sort of event coming up – even if it’s just one of my friends coming over for coffee, or a yoga class I’ve been to a million times, even seeing my own family – I can agonise about it for days. And it’s not just “events.” It’s any time I have to interact with other people – buying something, making a phone call (ugh). Some days, it’s ok. Others, it’s Emergency Exits Are Go.

Putting the word “social” in front of this sort of anxiety can possibly dull its impact. People might think it just means you’re shy or introverted, and maybe you are. But there’s way more to it than that. 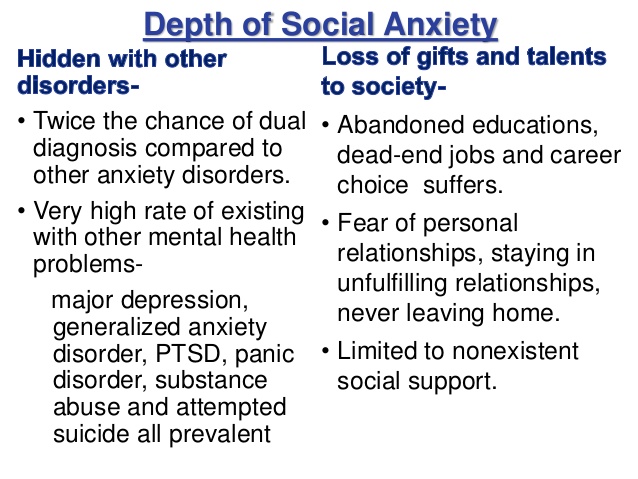 This is how it can end up if not recognised and managed properly.

I think I can come across as kind of cold, which I hate. I want to talk to people, but sometimes I completely forget how. I desperately search my mind for something to say, but it goes completely blank, like I don’t know language any more. Bye, bye Sarah. It’s your brain, checking out. See you tonight when you’re in bed, running over all of the witty things you could have said instead of making that weird uuuhhh sound with your mouth.

When I talk to people, I convince myself they don’t like me, so I’m already attempting to work my way up from the bottom. I become acutely aware of how my body is standing, how long it was since I last said anything. The silence starts to feel like its own sentient being. I come up with things to say and dismiss all of them because nothing sounds remotely interesting or funny. I’m afraid of saying the wrong thing and of everyone thinking I’m an idiot, or arrogant, or they’ll disagree with me and then I’ll panic because I’d rather stick toothpicks in my eyes than start conflict – something which always seems to surprise people. Huh. In many ways, I’m very glad that there was no social media when I was a teenager, because I think it would have killed me. But it probably also would have been incredibly reassuring. I know now that it’s not just me who feels like this – a lot of people do. Way more than you would ever think. We get pretty good at hiding it.

I don’t hide it as well as I used to, which has a lot to do with my physical illness. Being tired and sore just exacerbates everything. As sad as it is, I don’t have the energy a lot of the time to interact with people the way I used to. I don’t have what it takes to put on the mask that used to help me, to just fake it until I made it. And I hate that. I miss out on so much.

But in another way, maybe it’s made me a more honest person. I’m better at asking for what I need. I’m better at saying “I’m tired, I have to leave now.” I’m better at declining invitations and not feeling (as) guilty as I used to, because I know that pushing myself to go will only hurt my body later.

Social anxiety is something a lot of people deal with, in many varying degrees. And most people are pretty good at hiding it – or just avoiding the sorts of situations that would trigger it – so often, you wouldn’t know it’s an issue for them.

Oh my god, I honestly thought this was JUST ME

Humans are social animals, whether you consider yourself an introvert or an extrovert or any combination – we still need some sort of contact. So being freaked out by something you also need can be pretty damn difficult.

Which is why I give myself points for trying. Even if I kinda suck, and I feel uncomfortable, or I have to leave early, or I sorta trail off halfway through a sentence, then act like I’ve spotted someone else on the other side of the room, when really I’ve just spotted the door – well, at least I was there. I showed up. That counts for something.

Plus, I just really want my friends to know that this is what happens in my head. It has utterly no reflection on how much I love you. how much I want to hang out with you, or my ability to function as a communications professional (which is a really bizarre career choice when you think about it. At least most of the time I just get to write stuff, not say it to anyone).

This is something I want to try and get better at, because as I said, it’s gone downhill since I got sick. But that’s too easy of an excuse, for me personally. I don’t want to let myself off the hook. Because while I’m an introvert, I love spending time with my friends. I don’t want them to stop inviting me places. As much as I love my bed, it’s probably time we started to see other people. 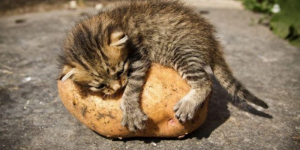 Social anxiety is real. But every time I don’t let it beat me, I get points – sometimes even in the form of hugs. I mean, who can say no to that bonus?

Except maybe if you’re a kitten hugging a potato.