I’ve actually been working on this post for a while, but today’s article about motherhood in the Herald was the final straw. Stop. bloody. asking me. when I’m going to have kids.

I’m 29. Most of my friends are in the same age bracket. It’s a question we all get asked, all the time, by friends, family, colleagues, strangers: When are you going to have kids?

Please, please, please. Just stop asking women this question. Why is it such a hard concept to grasp that reproductive choices are no one’s business but the person ‘s own?

Beyond the basic fact that a someone’s body isn’t up for public debate, the incredible thing about this question is all the assumptions behind it.

I’ve had the same conversation with so many of my woman friends lately. We’re all in our mid twenties to mid thirties. And we keep getting asked, regardless of relationship status, current children, or any other factor: When are you going to have a baby?

I actually find it astonishing that this is a socially acceptable question.

And everyone has an opinion about it. Like the woman in the Herald article, ‘Anne,’ who says “I feel sorry for anyone 33 plus with babies or toddlers. Cancer is preferable,” she said.

Ummm. What the fuck?

I’m not surprised she chose not to disclose her full name. Her views are revolting. 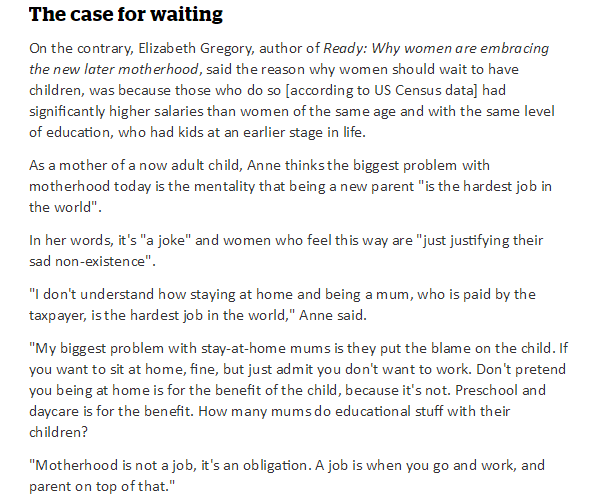 I don’t even know where to start with that clusterfuck.

There’s so many reasons a person might decide they want to have kids later in life. And again, those reasons and that decision are no one else’s goddamn business.

I’m interested in the word “obligation.” Let’s consider something revolutionary: woman don’t actually have to have children! Wow!

It doesn’t make us selfish if we choose not to. We don’t owe reproduction to anyone. There is no such thing as biological imperative, and if you try to bring those words into my house, you may as well turn and walk straight back out the door.

There are so many reasons women choose not to have children and all of them are completely legitimate. Illness, past trauma, the environment, relationship status, financial status. Or maybe they just. Don’t. Want. To. Have. Kids. That doesn’t make them bad people or any less of a woman. Motherhood is not the only way in which w can define ourselves.

And maybe, for whatever reason, they actually can’t have children, and being asked when they’re going to is completely traumatic.

As I said, I’m 29, so I’m far past the age when “Anne” considers me a viable candidate for motherhood. My illness means my chances of conceiving are low. I’m on a bunch of medication that I’d have to stop taking if I was going to try and get pregnant. My body may not handle the pregnancy itself, let alone caring for a baby.

I’ve always wanted to be a mother. I’ve always just assumed that that would be somewhere in my future. Accepting that the likelihood of that reduces by the day is really, really hard. The last thing I need is some stranger at a party asking me when I’m planning on having kids.

The answer is the same. Stay the hell out of my uterus. Thank you.

One Reply to “Get out of my uterus”