The protests against ROK and misogyny last weekend were so fantastic. I want to know – how do we keep this conversation going?

I wrote this post about the anti-misogyny protests the day before they happened, mainly to say how stoked I was that mainstream media had picked up on this issue. It’s not often we get to see the word misogyny in the news.

I don’t want to stop having this conversation. It’s really important that we keep saying that this is not ROK are not an isolated group and this is not a one-off fight. These men are extremists, but they represent a widespread view. Misogyny isn’t some abstract thing perpetuated by men who live in their mother’s basements. Unfortunately, it’s a problem because it’s everywhere.

It’s advertising that treats women like [sexual] objects. It’s walking down the street and getting catcalled. It’s being called an attention-seeker, a slut, a misandrist. It’s knowing that very few of my friends haven’t experienced some form of sexual violence. It’s being afraid of going into town at night. It’s working at the Women’s Centre and seeing our services bow under the weight of the need for them. It’s opening the paper today to see the front page story is a male hostel owner attempting to force an 18 year old girl into having sex with him in exchange for accommodation.

This Guardian piece by Lindy West – who’s been a target for Roosh for years – is an extremely informed and, incredibly, empathetic look at the problem.

“And, ethical concerns aside, Roosh facing some karmic retribution for the havoc he’s wreaked on women’s lives doesn’t bring me much satisfaction, because it really doesn’t accomplish much. He was already a buffoon caterwauling on the fringe. That the whole world knows it now doesn’t change that fact. What matters is that we recognize that Roosh and his repellant worldview don’t exist in a vacuum; they’re an extreme crystallization of attitudes with real roots in our real lives.

I don’t want horrible men to be doxxed and threatened online – I want them to be better. I want women to be able to fight for gender equality (or even just relay our lived experiences) without facing years of libel, stalking, emotional labor, howling rage, and relentless degradation. I want feminists to be able to do our work. I want my daughters to be safe. I want men to understand that women’s sexual boundaries are not a gray area, and women’s time and attention are not public commodities. I want men who feel frustrated and invisible, all those sad men in dark rooms, to find fulfillment in communities that don’t leverage female dehumanization for male validation. I want all of the men gleefully ripping Roosh to shreds on Twitter right now to react with equal dismay and decisiveness when they see their drunk friends bulldozing past women’s signals and outright “no”s, or read a news story that implies a rape victim was asking for it, or hear an elected official dismissing rape culture as feminist hysteria. I want actual change, not whack-a-mole with a grandiose troll.”

So, when we (mostly men, but women too) ask; what can I do about it? The answer is: a lot.

Misogyny is a culture that is reinforced by language. Change the language, and you start to change the reality. For example: call rape rape. It’s not sex. Teach the language of consent.

This was by far the most powerful picture of Saturday’s protests for me: (Thank you to @nz_sim). 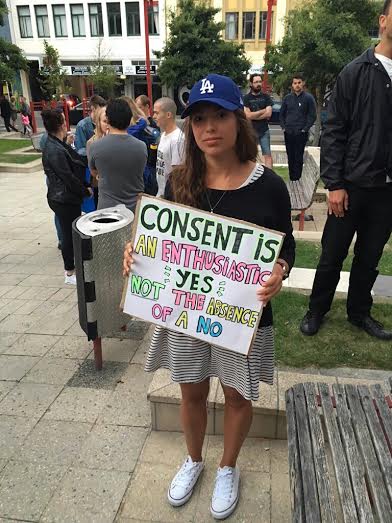 Listen to, and *believe* women

Kinda simple, except it’s not, because so often we say “this is my experience” and someone says “no it’s not.” Um…

Call out your mates

Hard to do? Yeah, probs. Absolutely vital? YES. Please. Do it. Women often can’t, because we put ourselves in the firing line if we do. But you can.

Check your own behaviour

It’s an unfortunate truth that I know plenty of people who think that they are above reproach. I’ve been guilty of it. It’s really, really hard to examine your own behaviour and notice what might be a bit shit. But it needs to be done.

I’ve mentioned before that I volunteer for the Nelson Women’s Centre. For the last six months, the team has been working on installing a new room for counselling. We’re one of the only places in Nelson that offers women ten free counselling sessions, and the service is under pressure. We needed more space. The new building is almost there, but we ran into a couple of hurdles which have extended the costs, and we need help to finish it. We also need new furniture for the existing room. This is a service that helps vulnerable women. If you can support it, we would really, really appreciate the help. The Givealittle is running now.

If you have other links you would like me to add, please let me know.

Also, feel free to comment with other ideas for keeping this conversation going.