Here’s some facts. Feminism isn’t mainstream. I might happily convince myself it is, in my lovely liberal left-leaning bubble. I might go days thinking that everyone understands and cares about sexism and women’s rights in the same way I do.

They don’t. But this week, we’ve got their attention.

If I’m at dinner with anyone other than my closest friends, I’ve learned not to bring up feminism or feminist issues. At best, I’ll get sidelong looks. At worst, someone will start arguing with me about how women have already won, men have rights too, the “PC police” are so sensitive, etc etc. Yup. I’ve heard it all before.

I’m not quite sure when it became such a crime to be sensitive.

ROK’s plans for an international meetup did something feminists haven’t been able to do in a long time: get the word “misogyny” front and centre in mainstream media.

Misogyny is one of those terms that gets people’s heckles up. They think it means “woman hating” in the same way they think feminists hate men.

Misogynists will be among the first to tell you that they looooove women. They do not. They love the idea of women, or women-like objects that behave in exactly the way men want them to.

Hatred is too simplistic. Misogyny means sexual discrimination and objectification. It means belittling women. It means violence against women.

It means all the things so many women experience every single day.

I am extremely excited about this weekend’s anti-misogyny protests. Even though ROK have supposedly cancelled their meetups, these events are going ahead. (See details and FAQ below).

I spoke to one of the organisers of the Wellington event.

This whole thing has been really scary for survivors. It’s really important that we stand up and show support. This is not just one guy, or some new thing. There are men here who think like this, and it’s very important we show them that it’s not ok. We’re not going to just ignore it, and we’re not going to lose sight of the wider issues. We’ve been able to get through to a lot of people with this, it’s been really great. Thank you so much to everyone for all the support, it’s been amazing. Tomorrow is going to be great.

When I am challenged about my feminism, I clam up – and I hate myself for it. I find it so hard to articulate why people should care in the same way I do. I’m very aware that I’m no expert. I feel like no matter what I say, there’ll be a comeback, and I’m not a confrontational person. I’m not good at defending myself. My words disappear.

I’m an intersectional feminist. That means I care about all issues relating to all women – black women, disabled women, trans women. And I care about men’s rights, too. Because, believe it or not, feminism is about equality, not female supremacy. 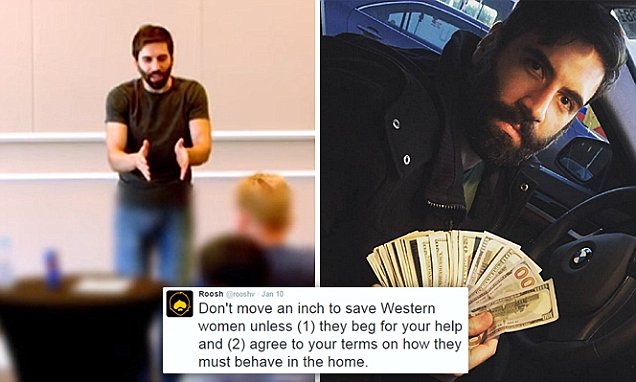 One of the single most important – and easy – things you can to improve the lives of others is by being aware of your language. But by way some people react when you suggest it, you’d think you’re trying to take candy from a baby.

You know how they say ‘Sticks and stones make break my bones, but words will never hurt me’?

Feminism may not yet be mainstream, but the media attention has revealed something important. While many people bristle at the F word, they do care about making sure women are safe. They know that men wanting to legalise rape and own women are abhorrent.

Let’s hope that they can go a step further, and see that misogyny isn’t just something that’s perpetrated by men like these. It’s an everyday thing. It’s a pervasive part of our culture. It’s advertising that treats women like sexual objects. It’s walking down the street and getting catcalled. It’s being called an attention-seeker, a slut, a misandrist. It’s knowing that very few of my friends haven’t experienced some form of sexual violence. It’s being afraid of going into town at night. It’s working at the Women’s Centre and seeing our services bow under the weight of the need for them. It’s opening the paper today to see the front page story is a male hostel owner attempting to force an 18 year old girl into having sex with him in exchange for accommodation.

No. not every man does these things. But it is up to every man to help change the culture.

So. A massive, massive thank you from the bottom of my heart to everyone who has been involved in organising the protests. And thank you to the men who have been our public voices in order to keep women safe. You are appreciated and invaluable.

Has RooshV canceled his event? Are we still going ahead with ours?

Return of Kings put out a statement saying all meetings worldwide had been canceled, because he couldn’t guarantee the safety and privacy of his attendees (ironic considering the violence he encourages, and that he threatens to dox anyone who opposes him). After further research, we’re pretty sure this cancellation is a decoy, and the meeting will still take place although the location is unclear. Regardless, our event will still go ahead. Supporters of his website still live here in Wellington, they’ve merely chosen to stay out of sight. We still need to send them and the wider public a strong message that hate aimed at women, gay and trans people is absolutely not okay and will not be tolerated. We want to have a positive, peaceful event where we can let the survivors, women, and LGBTQ community of Wellington know that the city has their back. It will still send a great message if a lot of people show up and have a great time.

What is this all about? Why are you so angry?

Return of Kings is a website run by Daryush Valizadeh, also known as Roosh V, which promotes violence against women and LGBTQ. Among the many disgusting things published there, Roosh V has said he thinks rape should be made legal, that men are animals incapable of not raping if they’re turned on, that it should be a crime for a woman to ask a man to slow down once sex has started, that women are responsible for “letting themselves” be raped, and that gay men want to make your children gay and force the world to pay for their “impulsive sex changes”. We oppose this message of violence, misogyny, homophobia and transphobia wholeheartedly. He’s planning a meeting for his followers in Wellington, and we’re organizing a peaceful counter-meeting to oppose him.

Isn’t it just one nut-job, though?

Unfortunately not. He has a following, and makes money from his views. This event came about because he’s planning a series of meetings all over the world for his fans.

Won’t this only give him the attention he wants? Surely we should just ignore him.

Maybe, but the media had already jumped on this before we even started. What this will definitely do is send a message of support to survivors of sexual assault, and the LGBTQ community, saying we don’t agree with his views and we feel they have no place in Wellington. We feel it’s important to let everyone know that Wellington is not a city that supports violence.

What about women who rape, and men who get raped? Don’t you care about them?

Of course we do! We know anyone of any gender can rape, and anyone of any gender can be raped. Roosh doesn’t, and his pro-rape, pro-violence message is clearly directed at women. Violence against men is no less real or serious than violence against anyone. We think everyone deserves to feel safe, but in this specific instance we’re standing up for the people who are under attack.

Is this safe? Will I get doxxed, harassed or attacked?

It is possible. We’re doing what we can to make this event safe, and we encourage everyone to look out for each other. We Will Walk With You have offered chaperones for anyone who feels unsafe walking to and from the event on the night. After all the publicity we’d be pretty surprised if many, or any, Return of Kings supporters showed up, but the police are aware of the event and can provide support if anyone is being harassed.

If any Roosh fans show up, can we kick their heads in?

Absolutely not. This event is peaceful, and we do not condone violence of any sort. You can bring flyers, placards, or any other information you want to hand out, but please keep it non-violent and non-threatening. Roosh and his supporters love to play the victim, so let’s not give them any excuse.

One Reply to “Roosh did feminism a favour”