Today is the United Nations International Day of Persons with Disabilities. The theme this year is “Inclusion matters: access and empowerment for people of all abilities.” So what does inclusion actually mean?

I don’t know what to write. I had a whole plan for today – painting my nails orange (the chosen colour for this year), doing stupid selfies with my orange ArthritisNZ flower, putting my #inclusionmatters wristband on the cat.

But instead I woke up to the news that three gunmen have attacked a centre for people with disabilities in San Bernadino, California, killing at least fourteen and wounding at least seventeen others. At this time one of the suspects is dead, one possibly wounded, and one still on the run. 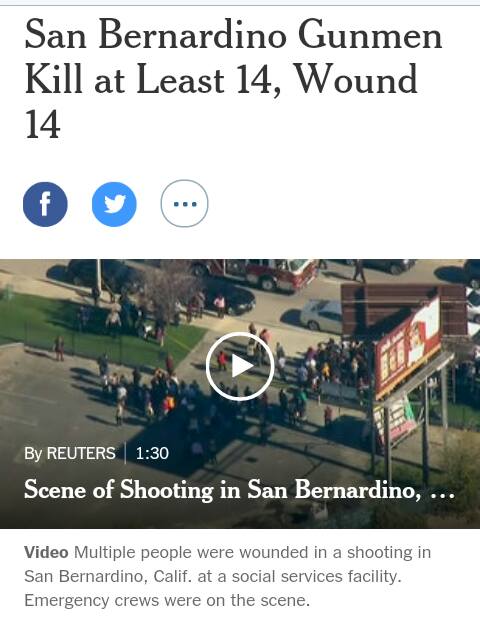 Inland Regional Services is a not-for-profit with 670 staff supporting more than 30,200 people in the region.

I just sat in bed for a while, in shock. As we all know, it’s not like mass shootings are uncommon. In fact, there’s been more shootings in American than there has been days this year. And the recent Planned Parenthood attacks cut close to the core.

But, for me, this, on this day… I’m just devestated. I just feel traumatised and exhausted.

We don’t know yet what the motive was for this attack. No motive could possibly explain it anyway. But it does highlight that with these things, it is the most vulnerable members of our global communities who are suffering. Those with disabilities. Those in poverty. Those with mental health issues – because what gets the blame, if the perpetrator is American?

People with disabilities suffer higher rates of abuse and domestic and sexual violence. Invisible disability is everywhere and mostly ignored. In fact, that invisibility is one of the subthemes of the Day this year.

In a blog on the Human Rights Commission site, Disability Rights Commissioner Paul Gibson says: “Internationally, the biggest problem in making disabled people’s rights real has been identified as our invisibility.”

Arthritis is largely invisible. ArthritisNZ Chief Executive Sandra Kirby says “This International Day is a reminder that arthritis is one of the leading causes of disability in our country.” 578,000 New Zealanders have arthritis in one of the more than 140 different forms.

When people can’t see suffering… it just tends to go by the wayside. In fact, even when they can, it does.

I’m lucky in that I can still live most of a life with my disability. It could be called minor or moderate (even though I don’t experience it that way). But there’s still a lot that could be done that would make a difference for me.

The Green party policies around disability are probably the best I’ve seen, particularly the stuff about supporting people into work. One of the biggest barriers to my inclusion, and others have said the same, is that I can’t work. Today their Disability spokesperson Mojo Mathers marked the Day by launching a new bill to support people with disability-assist dogs.

I guess I’ll continue on now with most of what I had already written for today, with some changes here and there.

The Human Rights Commission is leading a nationwide campaign to generate engagement with the Day of Persons with Disabilities – “a day of celebration and focus for people with disabilities.”

Last week I wrote that I’m  cynical about “commsed-up corporate-lead Happy Happy let’s-celebrate-people-with-disabilities “campaigns.” Part of the the reason is because I have written so damn much about life with disability over the past three years, as have many of my friends. What I’d love to see is upwards support of this work, rather than downwards “here’s what people with disability want from you.”

Inclusion means different things to different people and I’ve been having some really good conversations about that over the past few days.

I’m keen to see what’s actually happening in New Zealand to mark today, (edit: not fucking much) because how I see it is inclusion is important at three levels (this is simplification, but) – social, local, and government. Or you could call them social, local community and businesses and policy implementation, and policy creation and leadership.

HRC says today “provides opportunities for participation by all stakeholders to focus on issues related to the inclusion of persons with disabilities in society and development, both as beneficiaries and agents of change.”

It’d be great to see some sort of public commitment by government (those in charge of policy creation and leadership) to changes that involve more inclusion. Ie more people with disabilities on advisory boards. More acting as spokespeople. Deliberate choices that amplify the voices of those with disabilities and involve them in processes that effect them.

The HRC says: “The estimated one billion people living with disabilities worldwide face many barriers to inclusion in many key aspects of society. As a result, people with disabilities do not enjoy access to society on an equal basis with others, which includes areas of transportation, employment, and education as well as social and political participation. The right to participate in public life is essential to create stable democracies, active citizenship and reduce inequalities in society.”

WHAT DOES INCLUSION ACTUALLY MEAN?

For me, inclusion means all the above. Transportation, research that involves us, acknowledgement of the extent and impact of invisible illness, and consultation with people with disabilities with the development of social policy.

– I don’t get turned down for jobs because I can’t work 40 hours a week (something the Green policies would address). Someone commented on the last post about this with things along the same lines –

Part-time work should also be more widely available, like in Europe, and without having to miss out on opportunities for promotion and wage rises. Because people who get tired easily due to (in)visible illness are not less skilled, knowledgeable or motivated. Once we achieve that (among other things), there will be more inclusion. – Claudia

– I could do higher education in my chosen field. I can’t because I can’t study fulltime and I can’t get financial support.

– I don’t get labelled an “activist” or “a blogger” simply because I’m not a full-time paid writer and I’m outspoken about minority rights.

– There would be reduced rates for transportation like Metlink for people with disabilities, because often this is my only option for getting places and it can cost a fortune.

Jem Yoshioka commented on the last post with these thoughts, which really articulate a lot of my feelings too.

I think city design and access has a huge part to play in inclusion. For me, I sometimes need a place to sit, so a city that provides me with clean, comfortable and regular places to sit makes it much easier for me to get around. Reliable public transport is also an essential. On tough days it makes all the difference that I live on a regular bus route.

Social inclusion means receiving respect around what my limits are, and being able to participate without crossing them. It means not having to tell people all the time, but if I need to share, knowing that I will be met with empathy.

Inclusion benefits everyone, but it’s also something we all deserve. Spaces work better when they cater for the diverse ranges of bodies that make up people.

One of the things I mentioned above about inclusion was “social” and Jem’s identified that here. Sometimes, I don’t get respect for my limits. And sometimes, I get too much – like, people stop inviting me to things because they think I’ll always say no. For me, one of the saddest things about my illness is the friends I’ve lost, and the ones I may never get to make. I just cannot participate in society the way I want to. I am incredibly grateful for my online community, because so many days, that’s all I’ve got. But keeping up with friendships when you have a disability can be incredibly difficult. My pain and fatigue do limit me. I used to go out a lot, dinners, drinking, dancing, just having fun. Most of that isn’t on the cards any more. But even if I have to say no? It’s still nice to be asked.

Beyond that, it’s like – able people just often don’t seem to know how to interact with people with disabilities. And there’s a huge sliding scale here of “Oh, I don’t know if I should offer this person in a wheelchair help” to abuse, to what we’ve seen today, which appears to be discrimination on a massive and horrific scale.

So. What does inclusion mean to you? I hope you think about that, and not just in regards to yourself, but what you can do to make more space for people with disabilities. To make sure you’re more than open to them, in whatever capacity you can be – socially, professionally, politically. To make sure you respect them. To make sure you amplify their voices and stand beside them.

Please think of the lives we have lost today. It’s far too soon to do any more than that, but those people are gone and nothing can change that now.

2 Replies to “What does “inclusion” actually mean?”