Hi all, here’s a followup to my posts regarding Sean Plunket’s treatment of Louise Carroll. Mediaworks, unsurprisingly, didn’t uphold my complaint (it is being referred to the BSA). However, in the meantime Plunket actually apologised on his Facebook page.

I’m a bit behind the eight ball on this one. The incident occurred on Friday 25th September. I wrote about it and sent my complaint on the 29th. I got this response on October 22nd, calling Plunket’s behaviour just “cheeky” and refusing to uphold my complaint or follow through on my request that Plunket apologise to Louise.

However, unbeknowst to me, Louise, or perhaps Mediaworks (??), Plunket decided to do so. This was after my original post and complaint, but before I got the Mediaworks response. 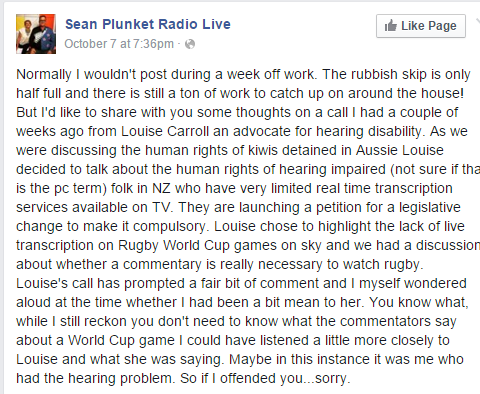 I mean, let’s be honest, it’s a shitty apology. Sure, Louise didn’t ring at a prearranged time, but that’s no excuse for the response she got. Why not say, hey, this sounds interesting, let’s make a time to chat about it?

It’s pretty obvious from the “Louise’s call has prompted a fair bit of comment” that this is a PR move.

If you’ve been following this, you’ll know very clearly what I think about the term “a bit mean.”

Look at how long this post is, and the apology comes riiiight at the end. He does so much scene setting and defense of himself first. What about just “Hey. I said something very stupid. I behaved in a deliberately offensive manner towards people with disabilities and I am sorry.”

And of course the final nail in the coffin “if I offended you…” No acceptance of actually being offensive.

Anyway, Louise knows about this post and has responded to it. The matter is being transferred to the BSA. So I’m going to bow out of it now.

At least there was some small recognition of his terrible behaviour.