Sometimes, people’s courage astounds us. Sometimes, we look at people and think ‘How are you still standing? How are you still going?’ Bird By Bird – Some Instructions on Writing and Life, on the surface, is a book about writing books. It’s a manual. Underneath, it’s about stupid, stuttering, sheer, wounded bravery.

“How alive am I willing to be?”

Anne Lamott is a bestselling author and writing teacher. Bird by Bird: Some Notes on Writing and Life is part memoir, part lessons for writers, often both at once.

I’ve read quite a few of these writing tips/autobiographic books now – Steven King’s On Writing, Deborah Levy’s Things I Don’t Want To Know, Steven Pressfield’s The War of Art.  They’ve all been very helpful in their own way.

I think the difference with Bird by Bird is the openness. Anne shares stories about her own vulnerability – she literally demonstrates her own point about the necessity of truth in writing. Not impartial facts. Not nonfiction. But realness. Authenticity. “You don’t always have to chop with the sword of truth. You can point with it, too.”

That’s something I have always tried to do here, and people often question or criticise me over it. They thing I should protect myself more. They think I invite vitriol. But I made a commitment to myself and to my readers. I really don’t see the point of doing otherwise, or how I could ask people to trust me. Dishonest writing doesn’t work, and sooner or later, the truth comes out.

We write to expose the unexposed.

It’s not easy to do. There’s some stories in Bird by Bird that I can imagine weren’t comfortable to share. But, as Lamott says “When people shine a little light on their monster, we find out how similar most of our monsters are… We don’t end up with a brand on our forehead. Instead, we compare notes.”

Which leads to the other theme I was really pleased to see explored in this book – the mental health of writers, and how much the process and industry of writing impacts on it.

Writing is a fickle beast. It giveth and it taketh away, and sometimes you don’t even get an invite to the birthday party. Lamott talks about asking her students why they want to write; what their goals are. Publication is high on the list.

Of course it is. It’s public recognition of your worth and your work. But it’s not the golden goose that will end all your problems. At the end of the day, it’s still just you and the desk.

Lamott told a harrowing yet strangely reassuring story about a novel getting rejected three times. As she wrote it the first time, she sent bits to her editor. He encouraged her to keep going. When it was finished, she sent him the whole thing. ‘It doesn’t work,’ he responded. ‘Try again.’ So, after licking her wounds, she did. She rewrote for several months, and she resubmitted. ‘It’s still not working,’ was the response. By this time, I’m pretty sure I would have flipped a table and sent the manuscript out the window. But, after a few deep breaths, she sat down to write a plot treatment of the whole thing. And it passed. He wanted it. So, years after starting, she completed the work.

This sort of thing must put massive strain on one’s esteem as a writer, and one’s mental health. And it happens all the time. Criticism and rejection are the only constants in a writer’s life.

“…days at the desk of frantic boredom, of angry hopelessness, of wanting to quit forever, and there will be days when it feels like they have caught and are riding a wave.”

I cried with laughter at Lamott’s descriptions of sending drafts to friends and deciding, after twenty minutes of no response, that the writing was awful, she was awful, her friend was awful, and what’s more the entire world was awful and everyone could just go to hell. I cried because that mental process is so familiar to me. It’s weirdly comforting to know that even hugely successful writers still suffer it, even if that means it’s never going to go away.

Courage is something every writer needs in bucketloads. To do the writing, to share the writing, and to constantly offer up your work for judgement to agents, editors, and publishers.

This particular page is the one that’s stuck with me. 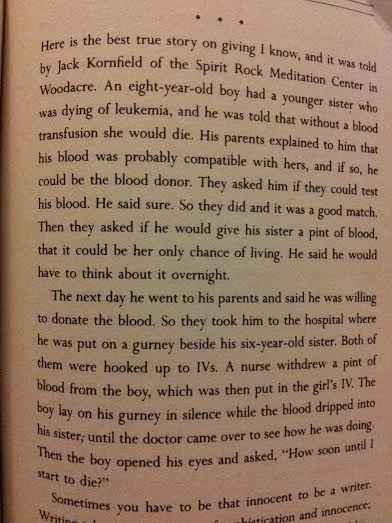 People have told me many times, my mentor included, that I need to separate my writing from my heart. To not see it as my literal blood on the page, being given over, being taken from me. That’s far easier said than done. As I said, I don’t write dishonestly. I write about things I’m passionate about, I write about personal things, even the fiction I write has me in it. When people attack it, even when they criticise kindly, even when they reject academically – I need that courage to weather it.

So, while I learn to see this all as just  work… at the moment I’m going to focus on accepting that it hurts like hell, that sometimes it feels like death, and that I’m doing it for very important reasons. And that, probably, it’s not as bad as I think it is and it will all work out ok.

Anyway, this is a great book. I’d recommend it to any writer, aspiring or established. It’s a reminder than many of the challenges we face are not unique, although we may often feel alone. Bare your monsters. You’ll probably find they look like someone else’s.