“Don’t wait for the light at the end of the tunnel. Get the bloody torch and take it there yourself.”

Yesterday I went with a bunch of girlfriends to a High Tea for International Women’s Day. The Tea (and auction) was a fundraiser for Nelson Regional Breast and Gynaecological Cancer Trust, Nelson Women’s Refuge – and the Nelson Women’s Centre, which I am part of.

It was awesome to be in a room completely full of women (for once!), to listen to strong women speak (without being spoken over) and to raise money for local women in need.

The speakers, and MC Breffni O’Rourke, represented women from all walks of life. Judgene Edgar from the Tasman District Council, Ali Boswijk who’s the International Project Manager for the World of Wearable Art, Principal at Nelson College for Girls Cathy Ewing, Dot Kettle CEO of Nelson Chamber of Commerce, and Annette Milligan, the Director of the Independent Nursing Practice.

Every speaker recognised the day both as a celebration of how far we have come – and how far we still have to go.

In many countries, International Women’s Day is a public holiday. Women receive gifts and a day off.

When the Nelson Suburban Club opened, women were not allowed in the door. Now they have their first woman president.

Two thirds of all people living in poverty are women and children.

Breffni O’Rourke is the only woman presenter in the Nelson region. “For twenty years my role was just to laugh. All I did was sit in the corner and laugh on cue at someone else’s jokes. Now I have no man in the studio. It’s just me!”

Isn’t it incredible that that’s a win for us as women?

Judene Edgar spoke about the underrepresentation of women as leaders. It made me think of this depressing graphic that came out recently: 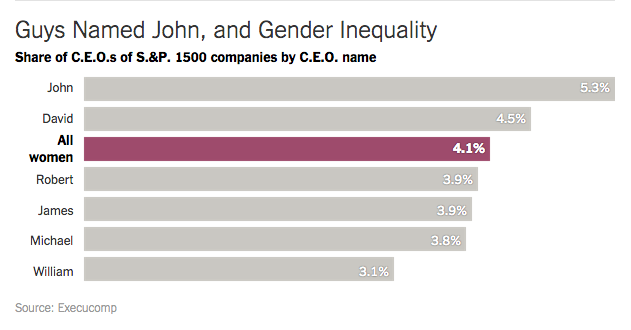 There are more men named John working as CEOs than there are women overall.

Judene recognised the work of Kate Sheppard, and pointed out that the current statistics of current voter turnout and the number of political positions occupied by women would probably horrify her.

Ali Boswijk, formerly of Nelson City Council and now International Projects Manager for the World of Wearable Art, spoke about perseverance, and how important it is for women in a world that often doesn’t want to listen.

She shared a story of a time when she was attempting to get funding for an art project. The local MP wouldn’t listen. The council wouldn’t listen. Finally, a man called her back. He wanted to meet with her – but he said he didn’t have much time, and would she drive with him to the airport and talk on the way?

Ali now works with Dame Suzie Moncrieff on the World of Wearable Art Show. WOW started on the sniff of an oily rag here in Nelson. Dame Suzie is fond of recalling the time a Nelson mayor (male) told her “You’re better off leaving town girlie. We don’t like that art stuff around here.”

Um. I guess he was a little bit wrong.

Ali says “If you think that something might not have immediate financial return or people are telling you no, but you truly believe in it – you just have to do it.”

Dot Kettle, who is the CEO of the Chamber of Commerce, a mother of three, and a local business owner, also addressed how far we have to go. She shared some data collected by Catalyst, which showed that in increase of women on the board by only 10% has a massive effect on economic performance. And yet, women make up only 12% of directors. The glass ceiling is not only still there – it’s ten meters thick and we’re banging on it with a broom.

It’s hard work. We know how far we still have to go. We’re aware of being role models. We’re aware of trying to push boundaries, of speaking up about things, of not backing down, of never giving an inch even though we’re repeatedly told we “already have equality”. We’re trying to force our way into boardrooms and beehives. We’re aware we’re carrying the mantle of torches lit by Kate Sheppard and Katherine Mansfield and Mary Ann Mueller and Helen Clark.

But we must never stop.

Annette Milligan, the Director of Nelson’s Independent Nursing Practice, finished the day off with this quote from Sarah Henderson.

“Don’t wait for the light at the end of the tunnel. Light the bloody torch and take it down there yourself.”

Thanks to the High Tea sponsors

One Reply to “International Women’s Day: A way to go”