My favourite kind of poem is the sort with last lines that land in your throat and stay there for days. Poems where the resolution and the climax happens in two beats that leave you slightly dazed. That’s what Nina Powle’s work does.

Girls of the Drift is Nina’s first collection of poems, published last year by Seraph Press.

I’ve been following Nina for a while, and I had a feeling this book would be special. I wasn’t disappointed.

While it’s clear a huge amount of work and research has gone these poems, they don’t feel laboured or overwrought, which is something I often struggle with myself. Nina’s youthful perspective is expressed in a crisp, mature voice that belies her experience.

I like to go into books completely open, so I didn’t read anything about Nina’s research before flipping open the first page. This proved to be a good strategy. The themes of historic New Zealand, colonialism, literature and women didn’t need introduction.

Katherine Mansfield’s presence is plain from the first poem, Leila, which transported me immediately into the world of Her First Ball.

The title poem was inspired by a 1928 pamphlet written by New Zealand poet Jessie Mackay on the moral and social responsibilities of young women, the original of which is held in the Alexander Turnbull Library.

Mansfield appears again in Vulcanology, perhaps my favourite poem of the set. 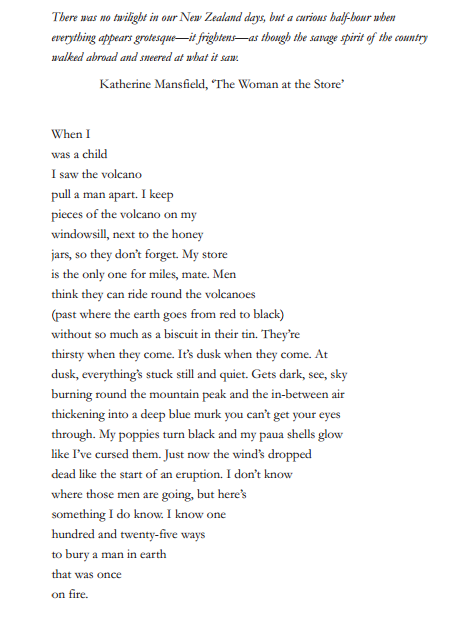 I’m also reminded of Stefanie Lash’s Bird Murder, probably due to the colonial setting, and another favourite writer of mine, Clementine von Radics. Clementine also has the art of that throat-sticking last line down pat, and I guess she would be about the same age.

Let’s be honest, I was going to like this book. It’s by a young woman, about women, and I’m all about that. But I’m glad I liked it as much as I did. It’s a small, neat, perfectly complete thing, and I am so looking forward to more of the same.

Many thanks to Helen Rickerby and Seraph Press for sending me a copy.

Nina Powles has just graduated from Victoria University of Wellington with an Honours degree in English literature and Chinese, and is about to begin her MA in creative writing at the International Institute of Modern Letters. She was Books Editor for Salient in 2014. Her poetry and non-fiction (mainly about whales, books, or feminism) has appeared in Turbine, Sweet Mammalian and Salient. She lives in Wellington with her dog, Toby.