I originally wrote this in January when the events surrounding the suicide of Dr Essay Anne Vanderbilt came to light. It was never published, because I was far too angry and didn’t trust myself, or my ability to deal with any resulting backlash. The first half is the original, and I have since added more thoughts.

Today, we had something happen where, because of a journalist’s sense of entitlement – that old adage “publish and be damned” – a woman died.

This piece is a really good examination of what happened.

What struck me most today was not actually the fact that the journalist wrote the story in the manner he did, ignoring requests not to do so and deliberately putting a life in danger, nor that his editor has stood by him, nor even that a woman died because of it. Transgender victimisation isn’t new, or rare. It’s tragic and horrific, and it happens all the time.

What made me stop in my tracks was the defence of Caleb Hannan’s actions by local New Zealand journalists who I just expected so much better from.

I know many intelligent, empathetic, ethical reporters who are working with integrity to research and write stories that serve the public good. Maybe that’s why I was so shocked and disappointed today.

The NZ Herald’s David Fisher defended Caleb Hannan’s breaking of his agreement with Dr V (yes, they had an agreement) to not focus on Dr V herself, or her medical history, by saying that it was Caleb’s story, and therefore Caleb’s choice. 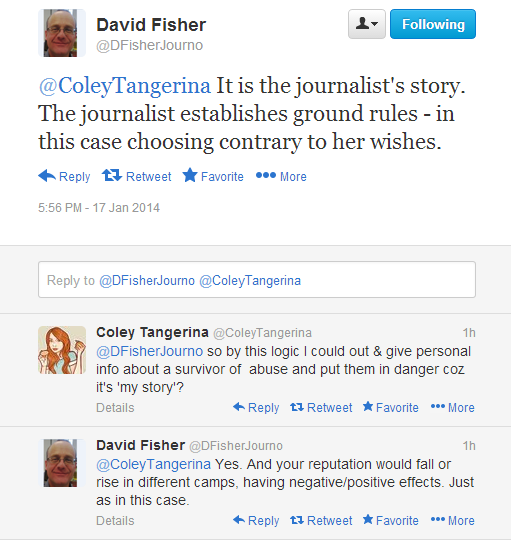 You know what I thought when I read that? THIS IS NOT CALEB’S STORY. THIS IS DR V’S STORY.

Just because a journalist tells a person’s life story – that does not mean they therefore own it.

And this is hardly about reputation, or mere “positive/negative effects.” This is about causing death because for some inexplicable reason you think you’re the one entitled to establish the “ground rules” when it’s not your life that’s on the line.

Let’s talk about journalistic ethics. As listed by the Society for Professional Journalists, they include Minismising Harm:

“Only an overriding public need can justify intrusion into anyone’s privacy.”

In New Zealand, the EPMU Code of Ethics begins with these two points:

(a) They shall report and interpret the news with scrupulous honesty by striving to disclose all essential facts and by not suppressing relevant, available facts or distorting by wrong or improper emphasis.

(b) They shall not place unnecessary emphasis on gender, race, sexual preference, religious belief, marital status or physical or mental disability.

I would say that this is a pretty clear breach of both of the SOJ code and the EPMU.

I therefore utterly fail to see why any journalist – any person – would be defending his actions.

As you can probably tell, I was very emotional when I wrote that. This was in January, long before I started working again, and before I started as a columnist for the Nelson Mail. Though I’m a qualified journalist, I’ve not spent much time in the newsroom. I do, however, consider myself a journalist now. Some people would probably disagree with me, and I’m definitely not one in the traditional sense. But the work I’m doing has evolved my perspective somewhat.

This is one of the many decisions we make as journalists, and as activists. Powerful stories help our cause. But people must come first, and people must be treated with respect. The cause won’t get anywhere without them.

That’s why I said no to WINZ giving my private information to a reporter (and yes, they asked). That’s why I said no when Arthritis New Zealand wanted to use my life as a featured story as part of a donation drive. Not because I don’t support the cause. But because my narrative belongs to me.

I hesitate, now, to publish this. It feels unfair to name-call Fisher, especially as he’s no longer on Twitter to be part of the discussion. But it’s relevant. It’s what I want to say. And so, with trepidation, here it is.