I’ve avoided writing anything about TPPA up til now, because frankly it just seemed too big and scary and I didn’t get it at all. I have a natural aversion to acronyms. But after this On The Left piece, I finally understand what it’s all about – and it’s bigger and scarier than I could have ever imagined.

Thousands of people across the country took to the streets to protest against the Trans-Pacific Partnership Agreement last week. Thanks to a fantastically written article by Jem Yoshioka at On The Left, I know why. You should read that for a comprehensive overview, but here’s a few main points.

Why is it different?

The website It’s Our Future has a huge amount of info about why we should we worried, and what we can do about it. 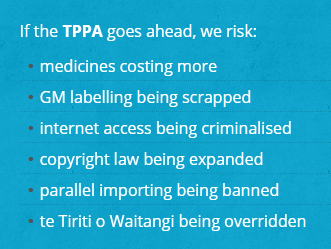 Allow me to to be entirely selfish for a second. Yes, I am concerned about all of the above. But I have to say, the possible effect on medication is what will immediately effect me, and is therefore what currently scares me most.

At the moment, I pick up an average of 4-6 scripts a month. At subsidised prices under PHARMAC, these cost $5 each. Once you reach a certain number (20, I think?) they become free. As you can imagine, I get to that pretty quick so I am lucky that I only have to pay the $15 for a new script from the doctor.

It’s Our Future says: The Pharmaceutical Management Agency decides what medicines the New Zealand government buys and subsidises for use by the public. Because PHARMAC purchases in bulk and makes its decisions in the interests of New Zealanders, we pay far less for medicines than we otherwise would.

A leaked negotiating text shows what the US is demanding on behalf of its big drug companies and how the benefits New Zealanders enjoy under PHARMAC are threatened by the TPPA. Although PHARMAC itself will not be dismantled, under the leaked text they would:

From Stuff: “New Plymouth protest spokeswoman Dr Stuart Bramhall slammed the ”secret deal” for giving companies the right to sue countries if they felt their laws were impeding their business.

She said her biggest concern was powerful multi-national drug companies could cost the country billions if they protest that Crown agency Pharmac’s purchase of generic medicines was hurting the sales of their branded pharmaceuticals.”

A collective of New Zealand doctors have written comprehensively about the impact of the TPPA on our health industry, and are demanding an independent assessment by qualified members before the deal is signed.

You may have heard me talking about Humira before. It’s an expensive drug used to treat autoimmune conditions like mine, and at the moment it is fully subsidised in New Zealand. The figured banded about is $1000 per shot, and injections are given every two weeks. That’s why it’s taking a long time for me to get the treatment – you have to tick a pretty long list of boxes.

But under the TPPA, it’s entirely possible I wouldn’t be able to get it at all.

It’s entirely possible that my medical expenses would skyrocket, with no access to subsidised scripts, and the $1000 or upwards for Humira coming from – where? Which would make both my ongoing maintenance medication, and the only proper treatment my doctors reckon will work for me, completely unobtainable.

You can read all about access to medicine, and the leaked documents which are our only access to information at the moment, here at itsourfuture.org.

In the meantime, we don’t get to see what’s being signed. We don’t have a clue what our government is prepared to give up for the precious export economy. And we’re expected to sit back and let that happen. 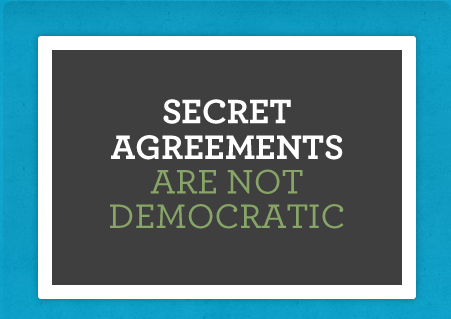