I think this is a natural progression in my feminism. It’s also been sparked by the fact that, at 27, my biological clock seems to have suddenly started ticking. And with my recent diagnosis etc, motherhood – and whether it will be the option I’ve always assumed it would be – has been on my mind.

Many of you will have heard me banging on about the poet David Whyte, as I’m currently listening to a series of lectures by him called What to Remember When Waking. The first of these is about being in a pivotal time in your life, when your beliefs about what your future will look like are changing, and you have to learn to be ok with loss. He suggests that one way forward is to look back, to look at your inheritance.

“You are not a troubled guest on this earth,
you are not an accident amidst other accidents
you were invited from another and greater night
than the one from which you have just emerged.”

-A stanza from the poem What to Remember When Waking, David Whyte.

I was named for my great grandmother on my mother’s side, Agnes Eileen Sarah King. She was one of the first woman in New Zealand to get a housing corp loan to own her own home, after she was widowed with children. Go Agnes! Home ownership is another thing your great granddaughter may never achieve.

I was close with both my grandmothers. and I regret that they passed before I got to have any sort of adult conversations with them. Both of them had to give their first baby up for adoption, a story which seems heartbreakingly common for that time.

My curiosity about their lives isn’t unselfish. A new field of research called ‘epigenetics’ suggests that trauma can actually be passed down through generations.

“According to new insights of behavioural epigenetics, traumatic experiences in our past, or in our recent ancestors’ past, leave molecular scars adhering to our DNA.”

– Grandma’s experiences leave a mark on your genes (Discover Magazine)

That makes sense to me. I also feel like I can draw strength from their experiences. They lived through hard times, raised 3 and 5 kids respectively, witnessed wars, saw the world change. I feel like if they can get through what they did… so can I. Really, I’m facing nothing in comparison and I have access to so much that they did not.

This is my paternal grandmother, Stephanie Wilson (nee Moss). 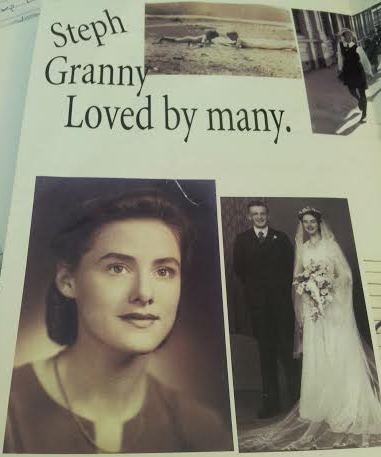 What a looker, eh? We had a lot in common. She was a poet who loved cats. I did not get her perfect eyebrows.

She was also politically angry. I have some of her writing and there’s a sentence here that says “The government would cut your lifeline without a qualm, to save the cost of a stamp.”

I was keen to hear what other people’s mothers, aunts, grandmothers, and greatgrandmothers had been up to, so I asked people on Twitter to share stories, under the hashtag #fuckyeahgreatwomen.

@nicgaston – “my nana was a single mum and primary school teacher. Taught all her grandkids to read, set a table, tell time, & speak up!”

@3rd_Gen – “my paternal great grand mother was widowed at age 27 with 6 kids & had to take over running the bakery as well.”

@thelittlepakeha – “Some kind of great-aunt of mine was the first woman Cabinet Minister in NZ.”

@roowoo – “My grandma was a thoroughly and openly gay-friendly minister in a super conservative denomination.”

@JoshC_NZ – “My Grandmother was one of the first woman Priests in NZ.”

@Styla73 – “my GREAT Grandmother wrote erotica too. Found a naked photo shoot she’d taken for her husband to take to war!”

@johubris – “my great grandmother was the first woman to graduate from Otago.”

@coleytangerina – “my Nana has a suffragist medal and was one of the first women to get a solo home-loan post divorce.”

@mrbertjohnson “learning about my grandmothers’ lives has shaped my world-view a lot. they lived through a lot.”

This also got me thinking about the Women’s Refuge’s current campaign, “Bring Back Kate.” A few people have expressed that it is a bit problematic. I fully and totally support Women’s Refuge and the main message here, which is the need to stop the massive levels of domestic violence in New Zealand. But the idea that Kate Sheppard was “the greatest champion of New Zealand women” is not quite right. Yes, her work contributed to getting us the vote and that should never be diminished. However… we have many, many champions and role models.

(I do have to contradict myself a tiny bit and say that, from a purely PR point of view, Bring Back Kate does have merit).

But, check out this 1888 list of “Ten Reasons Why The Women of New Zealand Should Vote” (by the Christian Temperance Union).

2. Because it has not yet been proved that the intelligence of women is only equal to that of children, nor that their social status is on a par with that of lunatics or convicts.

4. Because women are less accessible than men to most of the debasing influences now brought to bear upon elections, and by doubling the number of electors to be dealt with, women would make bribery and corruption less effective, as well as more difficult.

5. Because in the quietude of home women are less liable than men to be swayed by mere party feeling, and are inclined to attach great value to uprightness and rectitude of life in a candidate.

6. Because the presence of women at the polling-booth would have a refining and purifying effect.

Anyway. I’ll leave you with another little note from my Gran – I don’t know if she wrote this, or she just copied it into her notebook because she liked it – another thing we both do.

Justice is best served by the pursuit of the truth.

You got it, Gran.