You may have heard me use the term ‘quiet activism’ lately. What does that mean? How am I doing it? Why?

I never started out to be “an activist.” I didn’t picture myself as one until other people started calling me that. I was comfortable with it, for a while. It felt empowering. It felt like I was are the forefront of change.

But anyone who has occupied this sort of role – and most of us have in one way or another – know that it takes a toll. It’s tiring. My first column for the Nelson Mail was about that – the cost of being an outspoken woman. I saw a friend of my say recently that she doesn’t call herself an activist because she doesn’t have the energy for doing basic education around issues, raising awareness, and mobilising people. I think that’s totally fair enough. We all get tired of explaining the same things over and over, of trying to express our passion in an authentic, consumable way, of doing what sometimes just feels like pushing shit up hill.

It’s ok to choose not to do these things. It doesn’t make you any less genuine or any less committed. It’s ok to do them only when you have the energy for it.

I read this great piece by Julie Pagano about different types of activism – her main point being: Diversity of Tactics is Important. There’s no “right way” to do this, there’s no one true sword. There’s many methods and we’re going to need all of them if we’re going to make any headway.

This is pretty much the same for any woman who wants to occupy a street or an office or a bar. Our presence is a statement in itself. Sometimes, you don’t need to articulate it. You just need to be there.

In the past, activism has been a synonym for loud. I have been loud, and I do not regret the choice to give my voice to the issues that are important to me. But I can’t always do that – whether that be because of physical or emotional limitations – and I shouldn’t have to feel diminished in my role as someone who is committed to change, in times where I won’t be using my voice in the same way.

There is other reasons for not wanting the label. In some circles, “activist” is an epithet. The label can diminish the authenticity of the work.

This is especially true for women activists, because our passion and anger is interpreted as irrationality. I am starting to lose track of the times I’ve been called an “angry feminist” as if this somehow reduces the importance of the work, the credibility of the message.

Anger is not inherently bad. This is something that took me a long time to learn. And, what’s more – I have a right to it. I firmly believe in the adage “If you are not angry, you are not listening.”

Activism takes this is the next level. The first step is noticing the anger. The second is knowing why you feel it. And the third is choosing how you use it. Choosing to do nothing, at this point, is a totally valid option.

And it can be harnessed in ways that don’t destroy me. So that’s why, for now, I am now practicing quiet activism. Julie Pagano’s list of acts that I’d consider QAs include:

Here’s one other form of QA I’ve seen recently I really like. It’s a social experiment by my friend Dan and it’s called This Little Card. 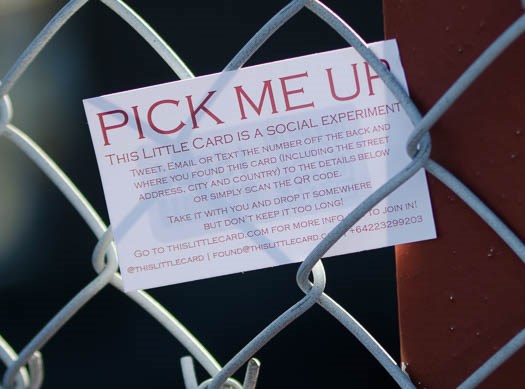 This Little Card is about encouraging people to notice and engage with the world around them. It’s really quite sweet and I think this kind of engagement is a very conscious social act. You can sign up for a stack of cards, then you leave them peppered around your neighborhood. People will – hopefully – pick them up and follow the instructions. I’ll be watching with interest!

Order some cards or donate towards the project here.

Finally, I’ll leave you with this amazing thing, from Julie’s post.