This is a reproduction of my column about tattoos and regulation in Nelson for the Nelson Mail, published by them 25 June 2014.

There’s a high-pitched buzzing noise in my ears. It’s Thursday afternoon, I’m lying face-down, and needles are piercing my skin at between 80 and 150 times a second.

This is not my first tattoo, and it probably won’t be my last. Despite the pain, I find the process charming and addictive.

All my ink was carefully planned and each has personal significance. I got my Southern Cross in Ottawa after seeing a New Zealand flag in a wool store and being racked by sudden homesickness.

The tattoo parlour was run by four Canadians who played loud death metal. It reeked reassuringly of antiseptic. They had never seen a Kiwi flag and thought I was from the UK.

My fish is in tribute to a friend and a shared childhood story. A word on my ankle is a constant reminder to have courage. The crossed spoon and pen on my left hip symbolise my journey as a writer with chronic illness.

People ask me two things. “Does it hurt?” and “Won’t you regret it?” The answer to both questions is yes, of course.

Everyone’s pain threshold is different. After the past couple of years of illness, mine is high.

Getting ink inserted into your skin hurts. But it’s not as bad as it sounds.

I got my first wax the same day as that Southern Cross ink, and I only cried during one of those things. And yes, occasionally, I regret them.

At different times in my life, they’ve meant different things to me. Their significance evolves. It’s kind of like having an old friend around. You don’t always like them, but you always love them.

While artist Sharon Salmon pierces purple flowers into my shoulder, she talks about her heritage and what led her here.

“My tribe, Ngati Kahungungu, were the only ones where the women did the tattooing. Men were weavers! I always knew that this was in my blood, that I wanted to be an artist.”

She’s been doing this for 25 years, and was one of the first woman tattooists in New Zealand. She’s an avid campaigner for more regulations around health, safety, and ethics in the industry.

“We used to be required to register with the National Tattoo Association but there’s nothing now. No accountability.”

The Ministry of Health released national safety guidelines in 1998, but Sharon says they’re not regularly enforced. Neither is the code of ethics.

In Auckland, a health and hygiene bylaw requires artists to be licensed. Nelson City Council heard Sharon speak last week on the possibility of replicating that here.

“If we had a regulated relationship with council, we’d be liable, and the public would be less at risk,” says Sharon.

“At the moment I could tattoo anything on anyone of any age, and there’s no rules around that.”

Sharon got her first tattoo when she was 13. As she puts the finishing touches on the vine on my shoulder, I can hear the regret in her voice.

“If there’d been something in place . . . I wouldn’t be wearing some of the things I’m wearing now.

“I was young, I was angry. It shouldn’t have been allowed to happen.”

Sharon has eight children. She says being a mother makes her even more aware of the risks and the need for ethics in tattoo artists.

There are more health and safety laws in the food industry than in the industry that pierces your skin, potentially exposes you to fatal diseases, and permanently marks your body.

“If one of my kids came home with a neck tattoo or something, I’d be blown away.

“I will often refuse to do neck tattoos, hand tattoos. I have to be OK with the artwork and the placement of it, I have to be sure that the person is making good choices for them. All that’s very important to me.”

As we finish up, she reminds me about looking after my new ink. The area, which is essentially a raw wound, has to be cleaned with soap and covered in antiseptic cream twice a day. No baths, no direct sunlight.

I’ve been through this before but it’s part of her job to tell me.

Sharon’s ancestors watch us from the wall. The plaque underneath reads: “The last of New Zealand’s tattooed Maori People,” referencing the decline of ta moko in the 20th century, a tradition which is now reviving.

“It is about who we are, and whom we come from. It is about where we are going, and how we choose to get there. And it is about for always, forever.”

“Always, forever,” I think as I zip my coat over the gladwrap protecting my new, permanent art.

They seem like pretty good words to keep in mind when making decisions about tattoos and industry regulation. 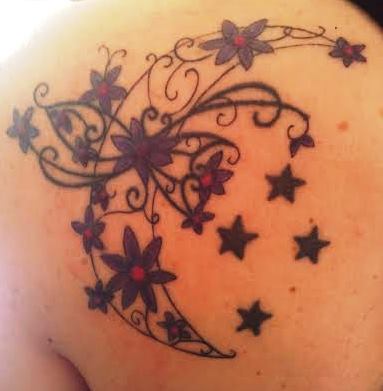