I’ve struggled to write this piece. Partly because I am exhausted and in pain, partly because I’m so filled with rage and despair that I’m finding it difficult to be articulate, partly because I feel like I’m bashing my head against a brick wall. I’m just saying the same things over and over and getting nowhere.

Last week, while I was away in Melbourne, Paula Bennett announced that, as a result of the welfare reforms introduced by her government in July last year, more than 21,000 people have had their benefits cut because they traveled overseas.

As if this is something to be proud of.

If you’ve been following my story, you will understand why I’m suspicious about the timing of this announcement. As someone with a background in PR, it seems to me like a deliberate attempt to hit back at the very recent negative publicity for MSD and WINZ. Publicity that was created by me. WINZ knew I was going away, I told them over a month ago. Plenty of time to get these ‘figures’ together. 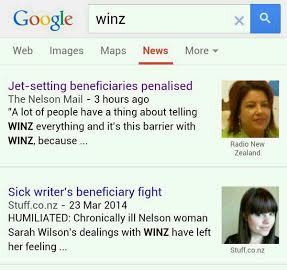 I’m not the first one to call this a publicity stunt. It’s yet another reinforcement of this ridiculous false dichotomy – ‘taxpayers are good/beneficiaries are evil.’

I’ve said it before and yes, even though it feels in some ways like I’m hitting a brick wall, I’ll continue to say it. This is scare-mongering propaganda. It’s just not the reality.

What the figures don’t say – and this is a crucial point – is that those same welfare reforms abolished the sickness benefit, and rolled the unemployment benefit and the sickness benefit into one. Many of the people who are ostensibly on a ‘Jobseeker benefit’ – myself included – are too sick to work. That’s why we’re entitled to support. Many of us have work, we are just too ill to do it. Once you know this, the government’s main point – which is that beneficiaries need to be in New Zealand to be searching for and available for work – crumbles completely.

In an interview with One News, Paula Bennett declares herself ‘incredulous’ that beneficiaries can afford to travel when others ‘can’t afford an overseas holiday.’ She’s encouraging anger. She’s encouraging ‘the hard-working taxpayer’ to be furious with ‘the lazy jet-setting beneficiary.’ (My words in italics). (Our dear leader takes up where she leaves off by accusing beneficiaries of holidaying on the Gold Coast when we should be looking for work.) What I find incredulous is how brazen the Minister is about manipulating data and presenting it in a way that reinforces blatant falsehoods.

She’s completely disingenuous. She knows better than anyone the amount of money beneficiaries receive, the amount we’re forced to live on. That’s why she says she’s incredulous. She admits it herself, she doesn’t know how we can afford it. The truth is – we can’t. There is no way that a beneficiary could take an overseas holiday – on the Gold Coast or anywhere – without help.

There’s an underlying, scary implication in all of this: If you’re being supported by the state, you’re accountable to the state. The state is entitled to know where you are and what you are doing at all times. (Incidentally, New Zealand Customs keeps tabs on beneficiaries and reports their exit and entry of the country to WINZ).

Note my use of the words ‘the state’ here. Because it is the state who is supporting me. Not ‘the taxpayer.’ Money does not go directly from their pocket to mine. It is regulated and cut and cut again by the government before I see a cent. It is a tiny percentage of the total tax we pay.

And I use “we” because  – you know what else? BENEFICIARIES ARE TAX PAYERS. We pay tax on the already minimal payments we get. We’re contributing to the running of the country, the same as anyone else.

While I was away, I was wracked with guilt. Despite the fact I did everything ‘right’ – I declared my travel plans to WINZ, I agreed to my benefit being stopped while I was gone, I didn’t use any of my benefit to pay for the trip – I was very aware of how I was being framed. A lazy ‘jetsetter’ who doesn’t want to work and is enjoying a holiday at the expense of others far more deserving than herself.

What does a beneficiary want with a holiday, anyway? Aren’t our whole lives a holiday?

My situation is one of those that the figures and the Minister do not reveal. And it’s certainly not unique. Michele A’Court wrote a great piece about this yesterday. Chris Miller also wrote a fantastic post when this first happened, which covers a lot of what I wanted to say.

The thing is, my circumstances shouldn’t even matter. If I had a penny for how many times people have asked me ‘what’s actually wrong’ with me, and suggested that I just need to be stronger and go back to work, I wouldn’t need a benefit. I’d be a rich woman.

No, my life isn’t a holiday. I’m very glad that I booked and paid for my tickets away before I went on a benefit, and that my family was prepared to help the trip happen. Being sick is horrendously difficult. Being in constant pain and exhaustion is difficult. Having your story go public, and dealing with everyone knowing and having an opinion about your private life is difficult. Constantly defending your integrity is difficult. If I didn’t have a break, I am certain the stress of it would have put me back in hospital.

Though of course, I couldn’t actually get away from all of this. Ms Bennett’s announcement was wonderfully timed. I was contacted by media for comment, though I declined for health reasons. Hearing that I was a ‘jetsetting beneficiary’ made me physically sick. I’m painfully aware of how I’m being painted. I know the government is encouraging people to resent me.

Anyway, I’m back now. I’m back and I’m fighting, again. WINZ is treating me with respect. I had an appointment yesterday and my benefit has been reinstated. I’m lucky.

I wonder how many others are not.